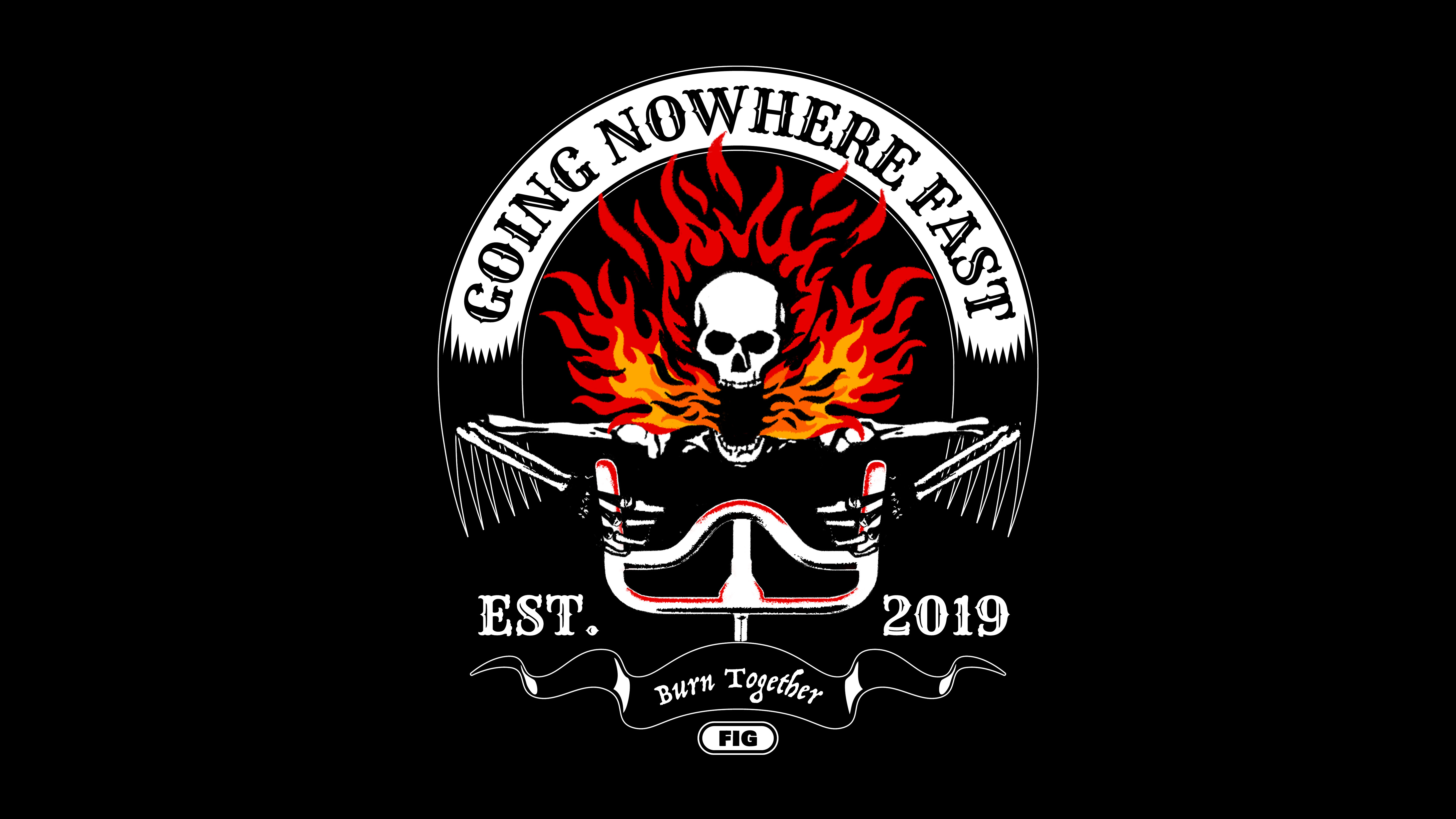 What it takes to ride with our Peloton crew.

“I am the linchpin of this club,” Jill Landaker Grunes, FIG’s Head of Production, tells me over Zoom. A shrill squeak peals out from the ether, as if to clamor in agreement. “Sorry, that’s the dog,” she explains. “Basil, calm down!”

I’ve called Jill to get the inside scoop on FIG’s Biker Gang. Not the motorcycle kind: the Peloton kind.

The Gang has humble origins. Jill got a Peloton bike in November 2016, and for 10 months, she was a lone wolf. Rising every day at 5AM before the kids, husband, and dog could steal her away, she masterminded a rigorous anaerobic regime of HIIT, Tabata, and Power Zone rides. As she crushed PRs (Personal Records) and aced FTPs (Functional Threshold Power tests), people around the office started to talk. Did she have a personal trainer? Was she running a marathon? Had she gone keto?

“I knew something was up,” recalls Maxie Etess, an Account Director. Straight-shooter that she is, she went to Jill for answers. Before long, she too owned a Peloton.

The Gang as we know it today emerged sometime in the fall of 2019. No one can say for sure when it happened, but everyone traces it to the spreadsheet. Meticulously color-coded and replete with a dizzying array of charts and pivot tables, it is The Gang’s central database for planning, tracking, and strategizing their weekly rides. After submitting an official request, I was granted “Viewer” access to said spreadsheet for 24 engrossing hours, and let me tell you this: they’re not spinning any wheels.

Though founded on a fitness premise, The Gang has evolved into something much more over the past seven months. Starved for the watercooler conversation, takeout lunch dates, weekly happy hours, and countless other social mainstays of our office culture, the self-described “Pelo-FIGs” have clung to their rides as one of few ways to stay connected. “It's a built-in social thing that also lends itself really easily to a priority that we all have, which is self-care,” explains Jill. “It’s like we brought a little piece of the office community home.”

Sean McGee, Director of Integrated Business Affairs and a veteran Peloton rider (he’s coming up on his 650th ride), had only just joined FIG when the office went virtual. “I was very quickly welcomed into the Pelo-FIGs,” he says. “It’s a lovely way to bond with people over something that’s not work-related, especially as a new employee.”

When Amy Blitzer, Director of Project Management and a Peloton rider since last summer, found out she was pregnant, The Gang was the first to know. “We were gossiping on GChat about an instructor who announced she was pregnant, so I decided it was a good time to tell them about me,” she recalls.

“Amy thought we were going to look at her metrics and realize she was pregnant because she was riding less,” says Jill. Performance data is a popular point of conversation in The Gang’s group chat, as is a certain class genre: Broadway.

“I hate Broadway,” says Amy. “Singing the Constitution does not motivate me,” she adds, referencing a popular Hamilton-themed ride.

“How could you hate Broadway?” implores Sean.

Beyond the Peloton owners (and regardless of Broadway sentiments), The Gang has struck a chord with dozens of FIG employees. In the early days of New York City’s shutdown, Creative Directors Howard Finkelstein and Ross Fletcher went to Design Director Max Friedman with an idea: custom biker jackets for the entire team. Working off the clock for weeks, a crew of internal designers and producers — none of whom own Peloton bikes, by the way — prototyped countless patches, slogans, and color schemes before landing on the final concept. 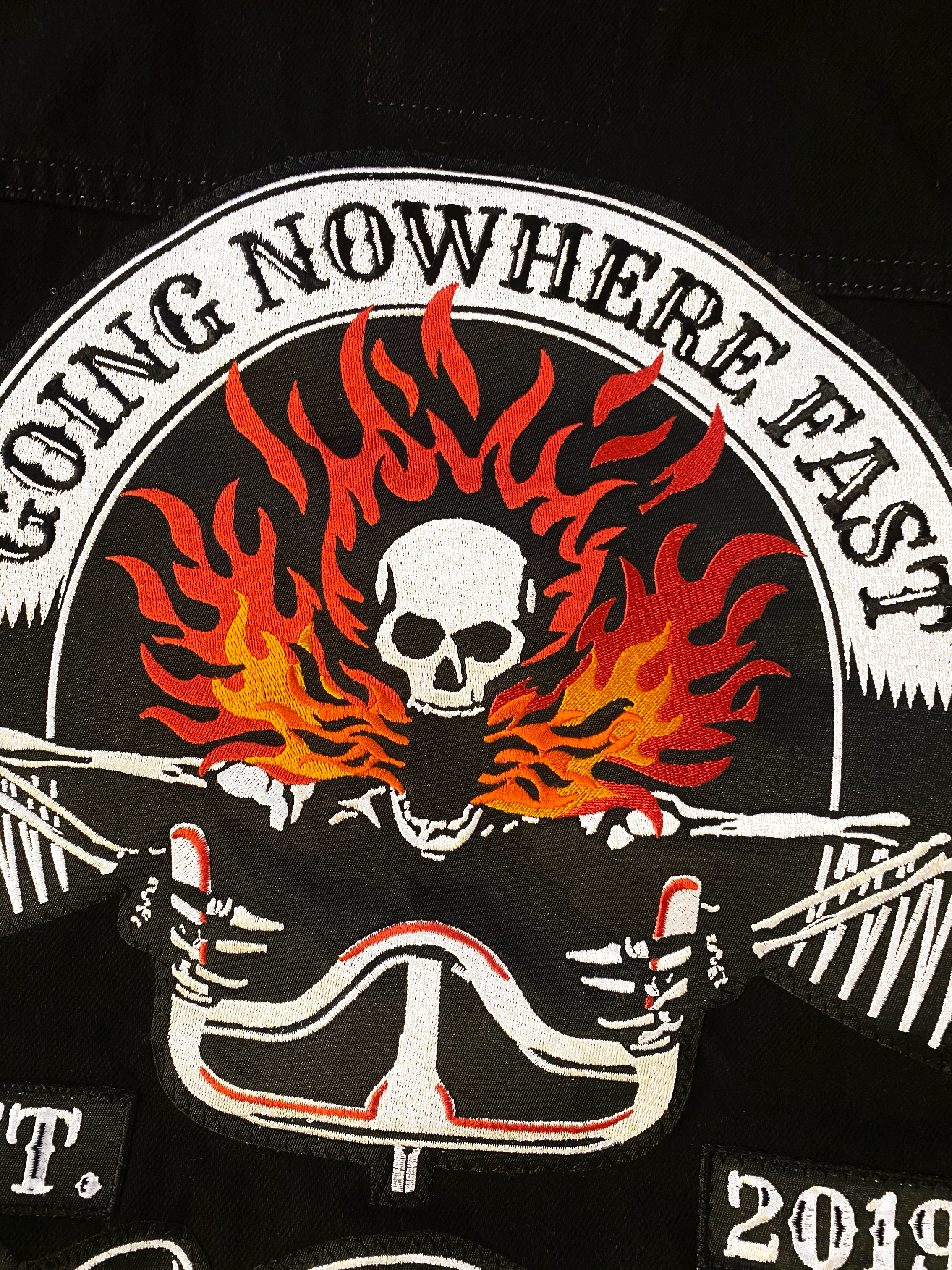 Close-up of our custom patchwork including The Gang’s slogan, “Going Nowhere Fast,” and official year of establishment. 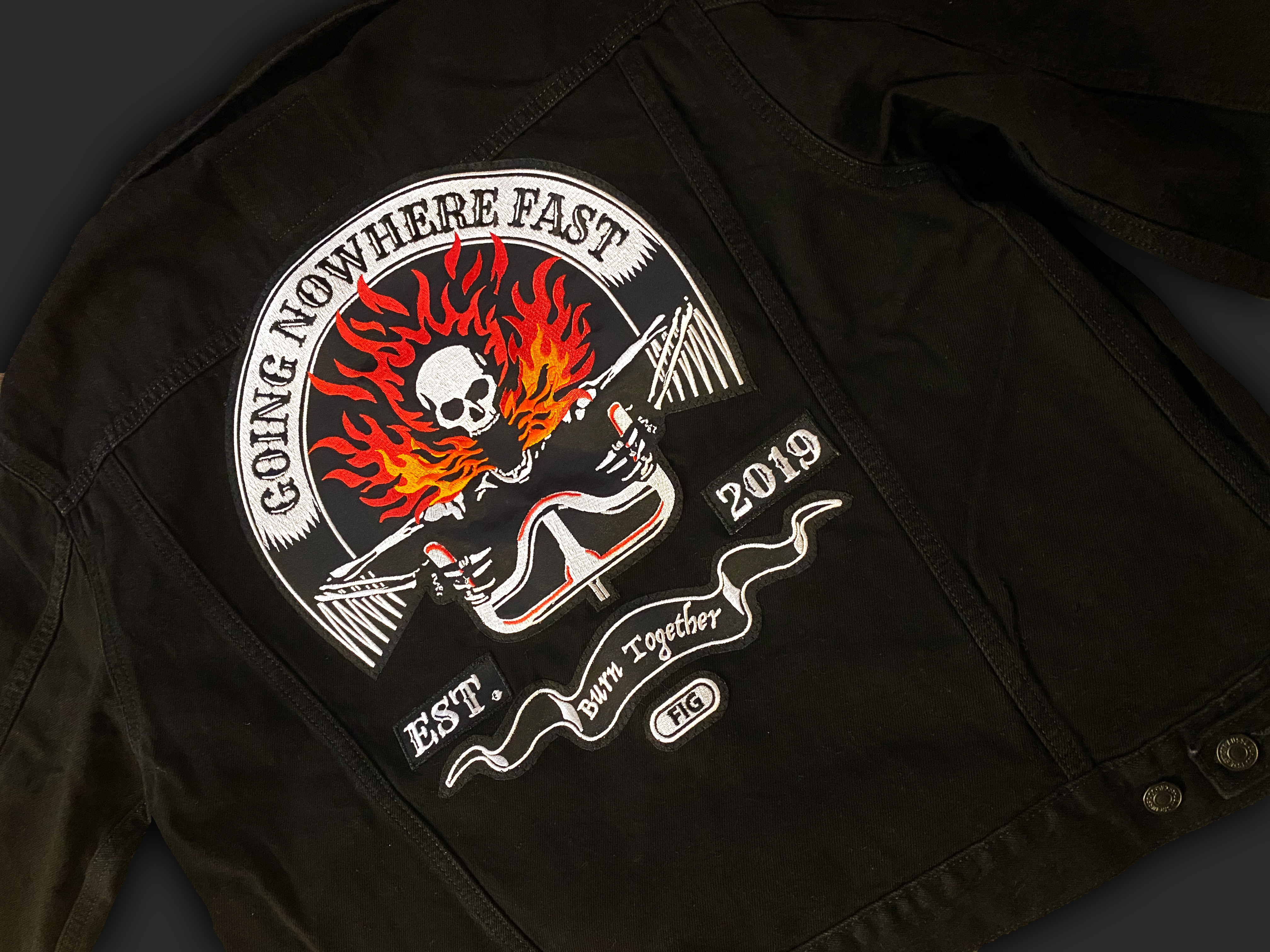 After five prototypes and dozens of hours of work, voila...The final design.

You might be wondering why so many people spent so much time designing something so, well, silly. “It was a way for us to be together when we couldn't physically be,” Howard explains. At FIG, we love what we do for work, but more than that, we love the people we do it with. And at a time when the world is feeling especially polarized, dark, and distant, The Gang has given us all something to celebrate. 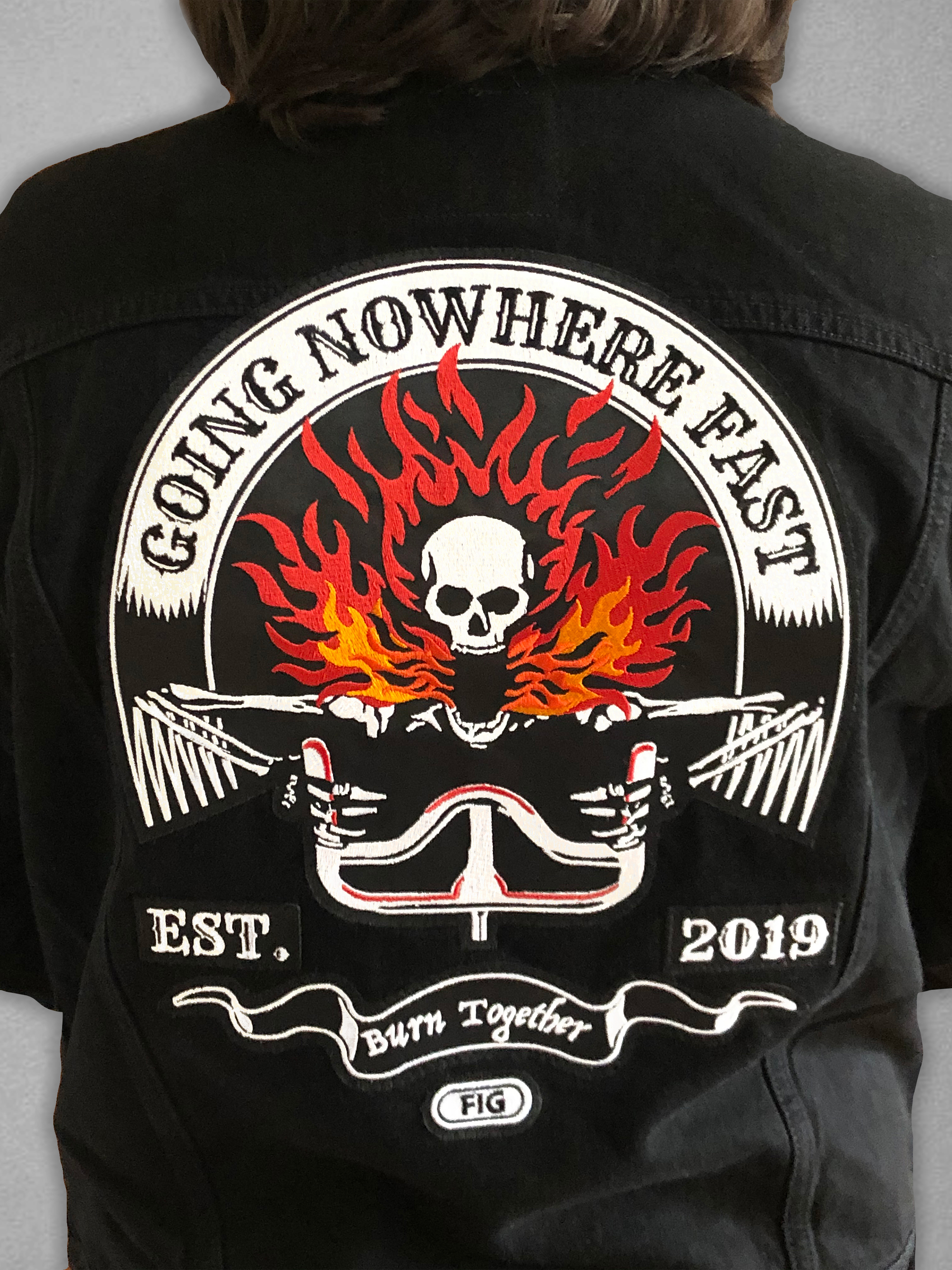 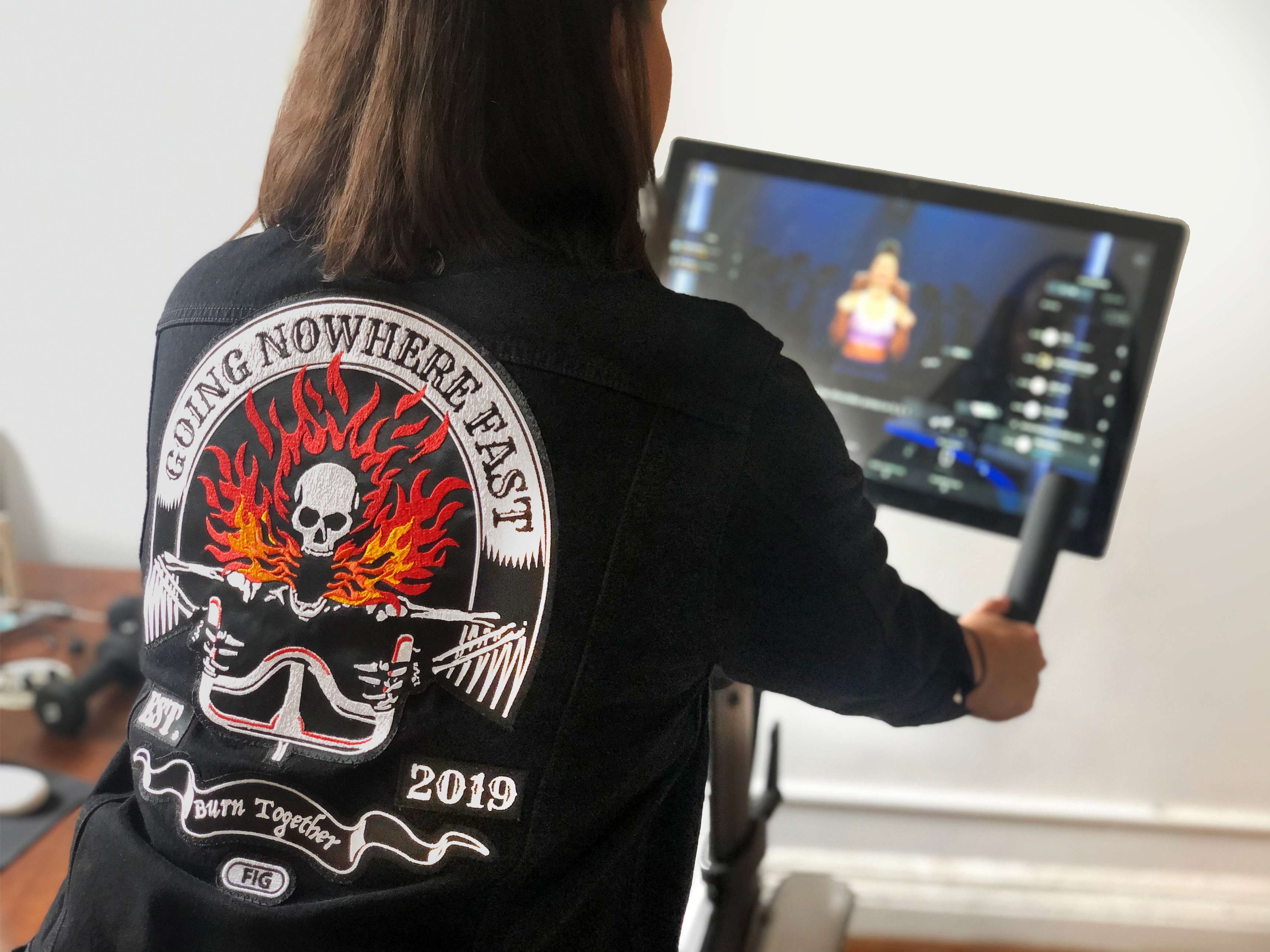 I've been riding with Peloton since... September 2017.

Favorite class type? Power Zone for the most solid workout, but Artist Series rides for the best music.

My go-to riding outfit is... Leggings, sports bra, and the Peloton headband that Jill got me for my birthday.

Ride-or-die workout buddy? Jill! She has kept me motivated since Day 1.

My workout fuel is... Pre-COVID, I would ride before work so it was 2 soft-boiled eggs. During-COVID, I ride at night so it's usually just dinner!

My proudest Peloton moment was... My 52-week streak.

Jill Landaker Grunes, a.k.a. “jillyhasitall” on Peloton, Head of Production

Favorite class type? I could never choose. The variety is the best part!

I can’t bike without… My headphones, a lot of water, a dark room, and my apple watch.

My workout fuel is... I always ride first thing in the morning on an empty stomach and eat breakfast about an hour later.

My proudest Peloton moment was... Continuing to ride through an unstable internet connection last Tuesday morning :)

I follow... The official Peloton page and Power Zone Pack group on Facebook and then a few instructors (Emma, Tunde, Matt, Ally, Robin).

Amy Blitzer, a.k.a. “itsblitz” on Peloton, Director of Project Management

I've been riding with Peloton since… August 2019.

Favorite class type? For riding, usually something that’s 30 minutes, and intervals make it seem super quick. The new barre classes are becoming a fave, too.

Favorite instructor? Depends on the mood; Emma Lovewell for chill or new music, Tunde to kick my butt or work on arms.

My go-to riding outfit is… Leggings and a sports bra (I'm pretending to be one of the instructors).

Ride-or-die workout buddy? The Pelo-FIG crew! Always holding me accountable and being supportive.

I can’t bike without… Good music.

My workout fuel is… Toast, peanut butter, banana. And lots of water all the time.

My next Peloton goal is… Trying some more of their class types — strength, yoga, barre.

Favorite instructor? Robin and Ally. Robin is much more of a tough love coach and Ally is gentle and inspiring.

Favorite music genre? It varies — I do like the new-music rides since I tend to listen to the same old music.

My go-to riding outfit is... T-shirt and Gap gym shorts.

My workout fuel is... Iced coffee before the ride. I usually ride shortly after I wake up.

My proudest Peloton moment was... I got a shoutout from Ally Love and a fabulous photo after the ride (I think it was my 350th). 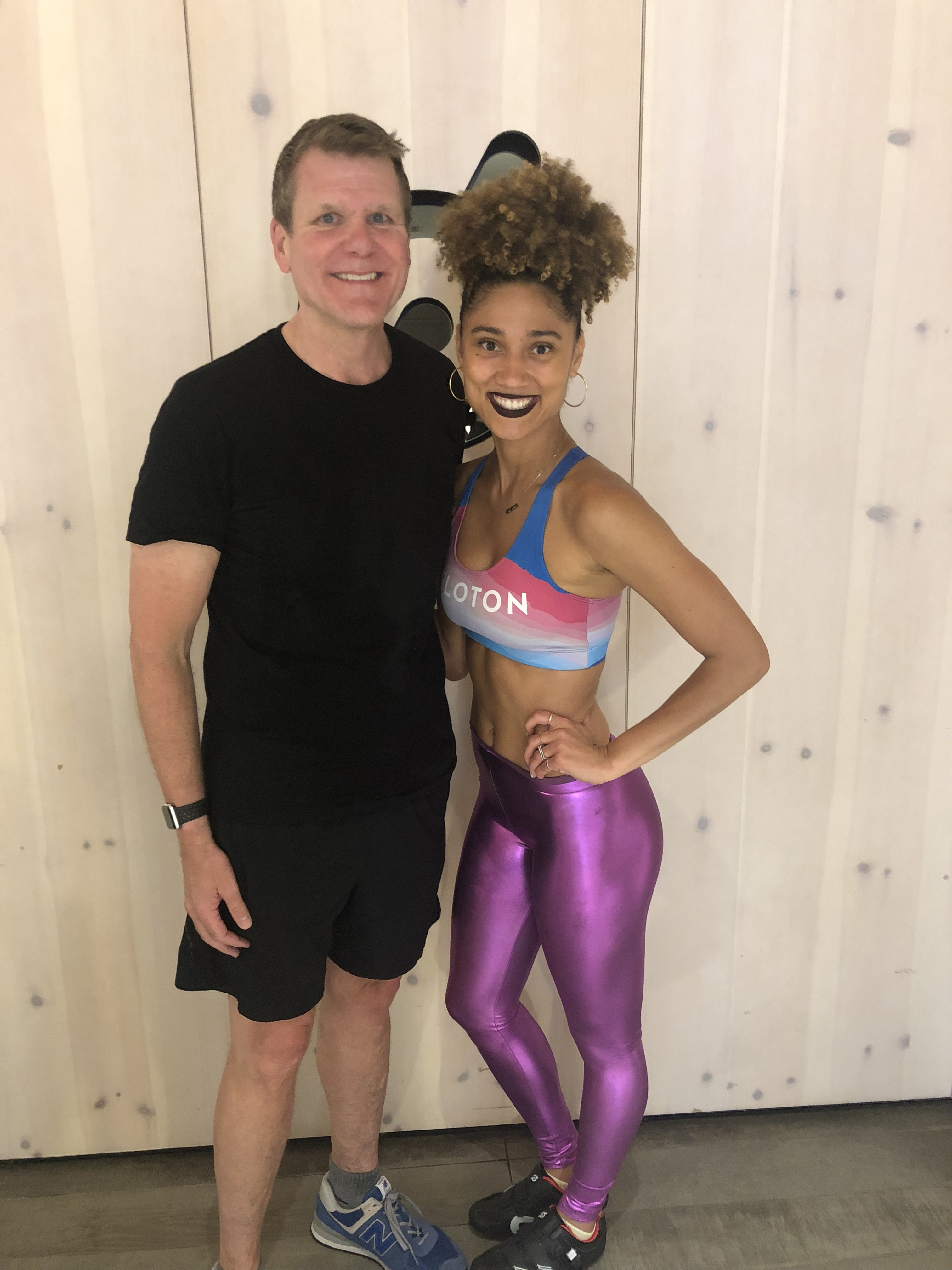 My next Peloton goal is… Do a barre class.